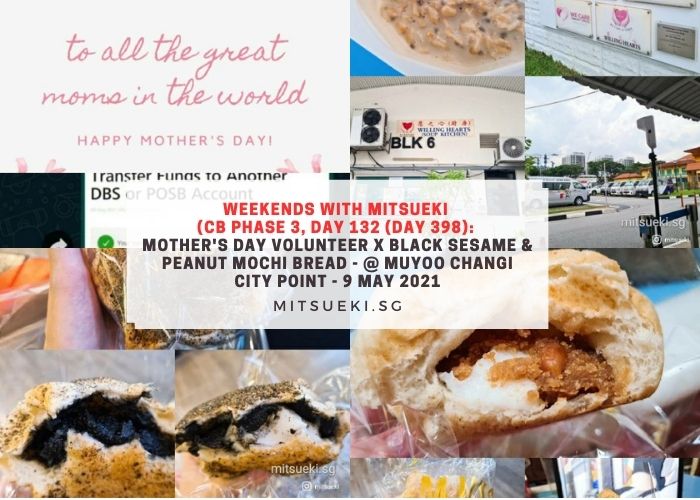 Happy Mother’s Day to all mums on this day! Hope you had a great celebration this 2021 🙂

For my mom, it went like this in the morning hahaha!

Since I celebrated it earlier in advance with my mom on Friday (read about our Pre-Mother’s Day lunch HERE), this means that my time was a little more free up for the Sunday and so I booked myself for a Willing Hearts Volunteer slot earlier in the week.

Morning eats done – overnight oats in soya bean (my current fave!) and I was off!

What I didn’t expect was to be taking on the SafeEntry/Registration duty for that day from my 12-4pm slot; verus the usual chopping/peeling duty that I last did in my first visit.

Oh well. At least it was an interesting one where I made a couple of new friends – the volunteer whom I helped to take over the duties from, as well as the resident security guard of Willing Hearts.

Next up was a visit to a place I’ve been meaning to go for a long time ever since I found out they opened a new outlet closer to me.

So previously Muyoo was at Bedok and I remembered them for their yummy bakes and my first ever fruit tea from them when I was wandering about during my gap year and did a gig with them.

Years down the road, they have since closed that Bedok outlet, opened one at Jurong Point and finally now, at Changi City Point.

I had the sesame mochi bread on the spot after my purchase and oh my, it was pretty decadent. The portion is quite big and will definitely fill you up like crazy. They are also generous with the paste though the mochi was just that dallop right at the end. Still, the bread is nice and chewy; I scoffed it all down at a go.

Back home and it’s time for a self study day on Week 2 of my 3rd Google Squared module.

Coupled with a workout later on together with completing my anime series, Kemono Jihen!

It’s super underrated this season due to heavy weights, but I do recommend as it’s worth a watch. Slightly gory and a little bit of adult mature themes (nothing loli or those scanty fan service stuff that I dislike), I enjoyed it. The first 12 episodes were a nice build up with plenty of character development and backstories. I look forward to the next season (hopefully!). Way better than Horimiya for sure.

This is also when I tried the other peanut mochi bread from Muyoo and oh my gosh, it actually has whole peanuts inside the bread rather than just the usual peanut paste and mochi that I was expecting.

I really like this bread alot; and also cos I’m an absolute sucker for peanuts. Only wished there were EVEN MORE peanut paste inside that would explode in my mouth like a tangyuan. Wow, that.. would be the icing on the cake if ever there’s a bread like that. But otherwise, it’s not too shabby and I’ll definitely return to purchase again.. even though it’s slightly out of the way to get it 😅 Then again, compared to Jurong – CCP isn’t that bad HAHAHAHA.

Oh and then I attempted to watch Zankyu no Terror and I already hate the first episode. Not an anime for me it seems, probably dropping it for something else.

Now what shall I watch next? I’m so spoiled for choice!