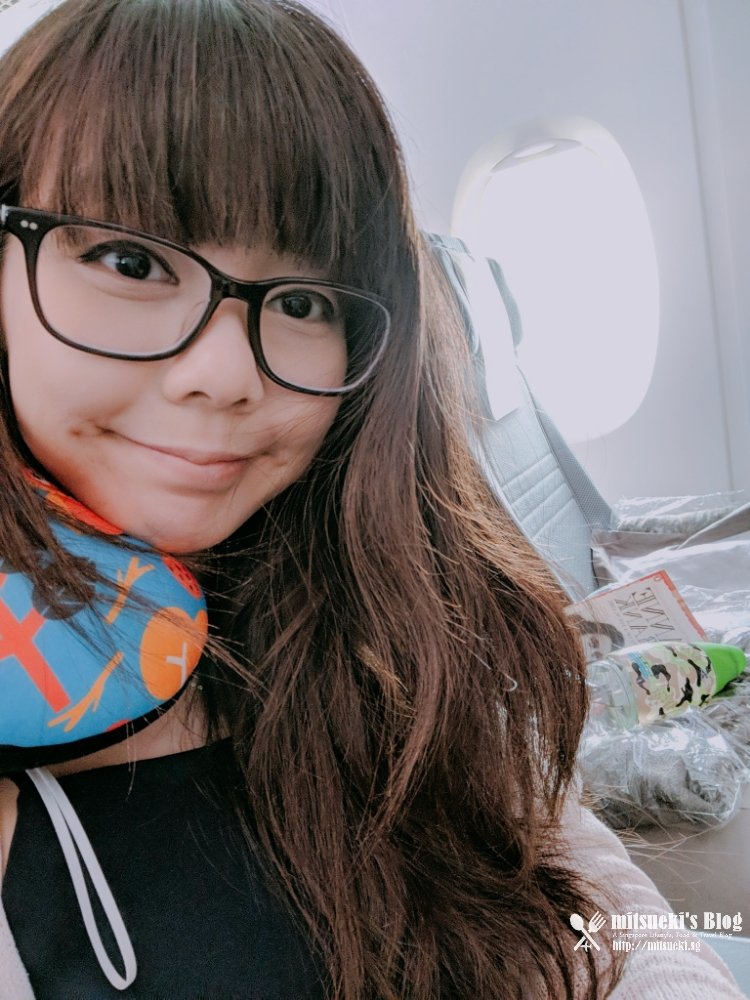 I was really eggcited for my return trip back to Singapore because I would be flying via one of my favourite types of aircraft – the A380 jumbo jet via Singapore Airlines (SQ)!(:

This time I entered the craft and only managed to pass by the Premium Economy rows before reaching my normal Economy row!

What’s provided per seat – a blanket and pillow. The blanket quality is rather scratchy tho, doesn’t feel the same as the one from the previous flight. Still – sufficient to keep you warm on the flight!

Again, I didn’t check in prior to my departure so I was assigned the emergency row seats when I asked for an aisle seat at the counter during the check in.

Was all alone having the entire row to myself whee~

During take off and landing you need to stow your entertainment system. As such, I highly recommend bringing a book to entertain yourself as needed if you’re the kind who needs some entertainment. I was writing my travelogue and reading my flight read aka The Diary of Anne Frank when I couldn’t watch my movie.

No bags allowed on the floor, you have to put them up at the overhead compartments. Luckily I was tall enough to reach it cos generally I usually have problems trying to get my stuff or close/open it.

Plug and charging ports were below the seat. My wire was super short so I just charged my phone using my powerbank.

No foot rest or storage in front of you. All the magazines etc were located right at the side of the plane making it a hassle. Well at least they’ve got barf bags here which was missing from the previous flight.

Man, all that sacrifice for leg space that I don’t need? No thanks. Luckily it was just a 4 hour flight.

Oh and one good thing about this row is that the toilets are right in front of you AND you get a sneak peek of some behind the scenes of a cabin crew’s job!

That aside, the Economy class for the A380 has a 3 x 4 x 3 seat configuration. There are some 2 seaters for the Premium Economy class right in front though. Not sure if there are 2 seaters at the back of the aircraft however.

Toilets are alright – slightly bigger than the usual and they provide more stuff i.e toothpaste etc.

Taking off was surprisingly very smooth. One of the smoothest take off I’ve experienced in my life actually. The aircraft is very steady and stable and that puts my mind to ease.

I spotted a rainbow that day too(:

Was finally able to watch my movie after take off whee. Similar to my previous experience, no headsets or earpiece were provided. I was late boarding the plane so I didn’t get the chance to grab any newspapers or the earpiece upon entering so I had to request for it.

Inception was my entertainment of choice for this flight. And it goes well with my peas and crackers snack provided by SQ.

And then an in flight meal served onboard. Decent. I really like the mashed potatoes in general hahha very niceeee.

With ice cream for dessert – the usual Haagen Dazs offering from SQ. Pity only one choice of flavor tho but it’s ok. Previously mine was a Magnum mini on my flight there fyi.

I’m not sure if I missed out on the menu cos it wasn’t handed out while I was onboard. Was spoiled for choice during my flight to Hong Kong but for this flight back – I only had two choices, a chicken or pork option. I guess it’s becos the A380 is such a huge aircraft, it’s gonna be difficult to coordinate such a varied menu.

Yes even for the meal service, one thing I noticed is that they are always missing trays and all the cabin crew really had to work together as a team passing each other trays / taking from any availability so that they would have enough for all the passengers while keeping up a smile.

It’s really not easy being a flight attendant so be nice and a lil patient to them (esp on a jumbo jet like the A380)! (:

The time flew by so fast and the announcement from the pilot came. We were to land in less than 30 mins.

Note that going to the toilet is a no-no during landing. Poor steward asked a passenger not to go but the passenger insisted. The captain was called and the announcement was made to remind all passengers not to do so. Mm, have to say that they really take all safety precautions very seriously. It has to be reported to the Captain when the passenger is out as well.

In general, mainly alot of communication goes on between the crew to ensure a pleasant flight for all.

That’s the perk of being seated right in front of perhaps the Head Steward or smth. He’s very busy always calling either the Captain, communicating with the other staff across and ensuring that all the passengers are taken care of. Yep, alot of work is done(:

Anyway, it was a very smooth landing as well. I really enjoy riding on these jumbo jets for the smooth flight – cos sometimes you don’t even realize that you’re landing till the sudden jolt of the wheels hitting the runway to announce the arrival.

Overall, I enjoyed my flight on the whole(:

Having taken SQ on two different aircrafts, I feel that if you want better service, more options etc – don’t go for an A380. But if you want a smoother / feels somewhat safer ride, go for the A380 hahaha. I’m not too fussy on both as long as I get an aisle seat that’s near the toilet. Just probably not an Emergency exit row seat 😂😂

And yep, that’s it for this post! Thanks for reading~ 😊