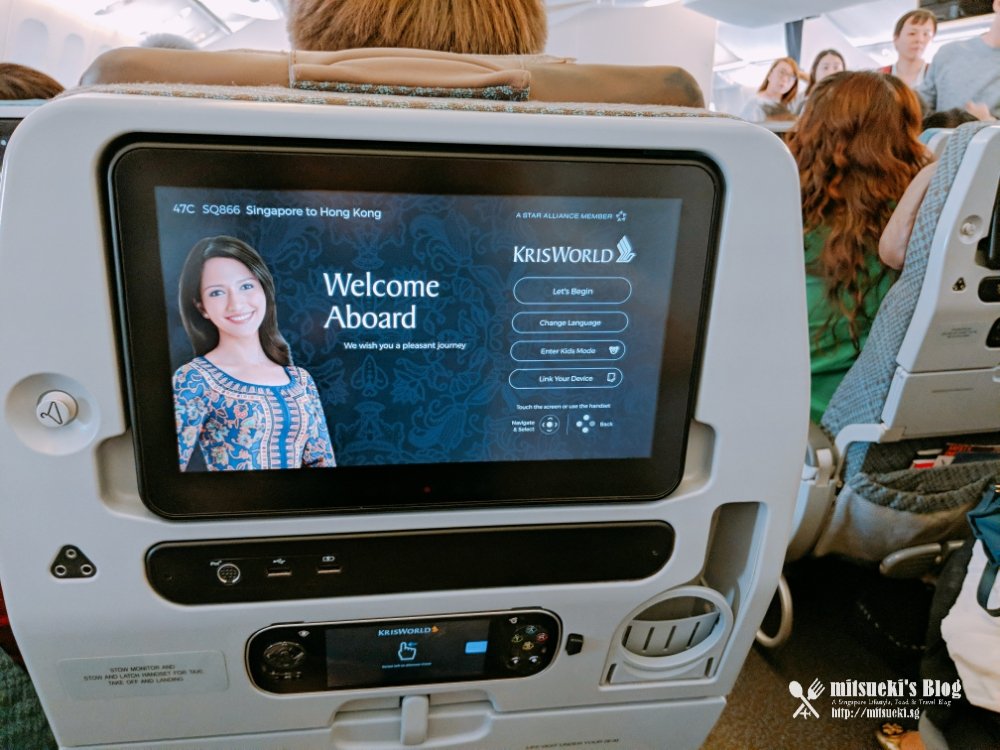 It’s been awhile since I flew by Singapore Airlines because it’s usually more expensive. At this moment, I put a priority on price especially during this adult gap year period and I don’t really mind budget flights as well on shorter haul trips. Well.. unless there’s an offer that I can’t bypass up on.

That being said, I’m glad I had expiring miles and there was a nice offer for SQ flights flying to Hong Kong. It was a couple of dollars more expensive compared to budget air once you shave off the savings saved from the miles but it’s worth to top up. I paid $210 for a return ticket to Hong Kong via Singapore Airlines in case you were wondering!

For my first leg of my Hong Kong trip, I flew via a smaller aircraft, a Boeing B777-300ER.

Checking in was smooth and such at Terminal 3 and it wasn’t too long till I was at the boarding gates for my flight. I was only assigned my seats at the counter as I experienced some check in issues using the machine.

Oh ya you gotta pay for choosing your seats now on SQ apparently, or isit for my fare class? I didn’t check in prior to that. Nonetheless, the ground staff was very nice to give me an aisle seat which I really appreciate!

Went past those comfy looking and plush Business Class seats (ah my dream one day), the Premium Economy seats and then Economy Class.

Lol definitely a stark difference as you pass through the 3 classes huh? Well, you get what you pay for.

That aside, the Economy Class is a 3 x 3 x 3 seater configuration except for the last row which is a two seater.

Generally when I used to travel with my partner or friend – those are the seats I would choose cos of the proximity to the toilet and a two seater is much cosier of course.

We were given pillows and a blanket at each of our seats. Unfortunately the blanket I had was a little torn though.

Seat pitch and width is comfy and rather wide. I’m rather petite at 5’1 so I had plenty of space and it wasn’t cramped at all for my side.

Footrest also provided – one of the rare planes that I’ve sat which has it!

I’m happy with the KrisWorld Entertainment system provided with all the very useful bells and whistles including a special USB charging port which powered up my phone juice sweetly.

The entertainment system comes with quite a large selection of 300+ movies, 690+ shows and such accordingly to the KrisWorld magazine provided.

Not too shabby though I’m surprised that there are more shows vs movies though. I enjoyed my Han Solo movie – missed this in the theatres previously!(:

Other magazines provided include the SilverKris monthly magazine and Krisshop of cos. I have to say that some of the magazines weren’t in too pristine a condition though.

Surprised it’s not there at my seat pocket by default but seems like it’s a complimentary earpiece for all passengers maybe that’s why!

Oh ya, there’s no barf bag provided as an fyi.

I observed that the flight crew were all very organized and systematic and this round, there were ALOT of special meals and requests.

In fact, the people in front, beside and behind me had some special meal requests! As such, all staff irrespective of their kebaya’s colors of red, green, blue and purple were all out in full force to ensure preparations.

Smooth giving out and clearing of warm towels to start off our flight.

Gotta commend a stewardess who remembered my request for my immigration form and came back to me despite her busy work.

They also gave out the menu prior the take off and I have to say that the menu is impressive with a large selection to choose from – even for Economy Class.

Can you imagine I was actually spoilt for choice?

Pilot was good in his announcement too. Friendly!

Very smart marketing to tie up marketing Singapore as a destination in the safety video. I’m impressed. Sign language is used too btw.

Example? This is the brace brace portion filmed at Henderson Wave as seen above! Definitely not your boring safety video.

And of cos, ending off with Marina Bay Sands because you have to hahahaha.

Went to the toilet for a gander after take off and the green light was on. It’s your typical airline toilet luhs but there are some SQ amenities provided onboard naturally!

Snacks and a round of drinks were provided at the start of the flight after takeoff.

Lunch was later served onboard and I went for a Western option naturally – the baked fish fillet with dill and caper sauce served with mashed potatoes and vegetables.

The appetizer is a Chicken Terrine with fresh veggies and there’s also a freshly baked bread roll served with President’s butter as well.

Opted for a pretentious white wine to pair with my meal, a Sauvignon Blanc but lol it was rather blah tbh HHAHAHA.

I surprisingly finished everything. Good 🙂

Dessert was a mini magnum. But I spied some people having Ben & Jerry’s instead – would have liked that better 😢

Wasn’t too long before it was touchdown time and my journey with Singapore Airlines for the first leg of this trip is now over. Don’t really have many complaints as I was overall very happy with my whole flight experience on Singapore Airlines!

What I’m more excited for however is to experience is flying on the Singapore Airlines A380 jumbo set for my trip back to Singapore! Not sure if I would have a different experience compared to this so we shall see!

Hehe, no regrets taking SQ and boy, one day I would really love to take their Business Class (or First Class!) if I ever have the opportunity~ It’s my bucket list dream ^^

Thanks for reading this flight report and stay tuned to my next post!(: