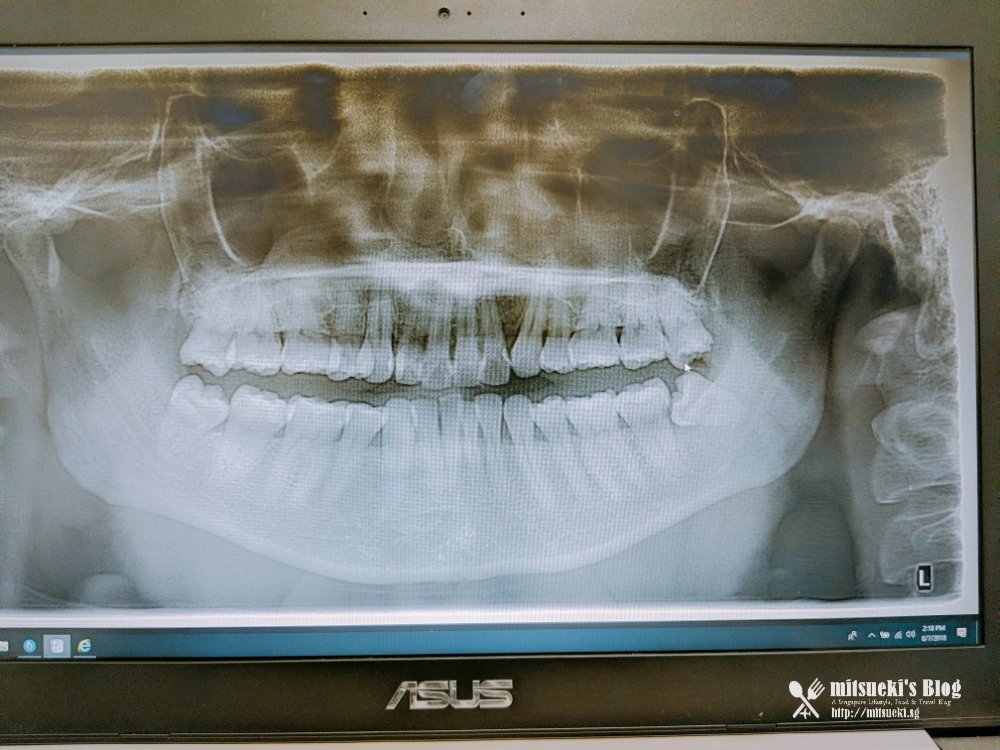 It’s D-Day today and you know what? I was frighteningly and eerily calm about the whole thing – which is super weird because I’m usually a panicky/nervous/worrisome person by nature. But just not today..lol, am chalking it up to my previous scare the night before and perhaps a host of other things that occupied my mind hence leading me to become a very quiet/brooding person that morning. #moodswings

My very very last meal was this beehoon with chicken and gu lou rou. I didn’t finish it cos #carbs but on hindsight, I should have .. considering that I wouldn’t be able to consume such solid for a long time hurhur.

Yeah so I said I wasn’t nervous at first right? But I think it’s a front for me in a way. I was very calm on the outside but inwardly I was PETRIFIED when it was time for the surgery. Think my hands were cold and shaking/trembling for abit though. But I made up my mind to go for it and remove ALL of them after so long and I wasn’t gonna back out of it. Already did research online on what to expect (pre and post surgery) so I was quite ready.

I’ve told my friends that I was removing all of them and the OMG why 4 responses from them has been kinda funny. I just didn’t want to suffer the pain twice so do all at a shot. The price is cheaper as well but to me- I was more concerned about the pain part. The logic is.. why would I pay TWICE to suffer two times (and if you suffered once alrdy..you know u gotta go thru it again..) when I can pay ONCE to suffer it all at go and get over it? And you’ll never never have to do it again lol. 😂

In case you were wondering, my dentist is Dr Yong, an oral surgeon who specializes in wisdom tooth surgery and he has to be called in specially to do the surgery with a refundable deposit as the particular Q&M clinic I go to is a small one. If I’m not wrong, his main workplace is the Bugis Q&M!

He is quite a nice guy and he sat me and my mom down prior to the surgery to go through the entire procedure, what to expect pre and post surgery, showed me my teeth x-ray as well as calculated the final price for me. Yep, it’s really not cheap to do a wisdom tooth surgery but if it’s impacting your other teeth – it’s a MUST. I was unlucky that I have two impacted bottom teeth which HAD to be removed (one is long overdue in fact) so I went on ahead with my decision to remove all 4 of them becos my top 2 were growing out as well. An additional bonus from Dr Yong was that he was removing my top 2 teeth for free too, phew!

First, Dr Yong gave me medication to take including the antibiotics, anti swelling and painkillers and such before starting the surgery. It’s a good call imo and I appreciated that!

Then it was time to do the localized injections for the local anesthesia. He will start off with the baby needles first (small pinpricks) before moving on to the huge ass ones. I suggest closing your eyes during this period so you don’t see how freaking big the needles are. If you’re prone to panicking, listen to some music as a distraction but not too loud that you can’t hear what the dentist is saying.

It takes awhile for the local anesthesia to kick in and it’s quite hilarious becos I didn’t know where my mouth was when he asked me to rinse it. Lol. He then proceeded with the surgery once everything was numb and such. No pain during the surgery guaranteed he promised.

Fyi, the estimated procedure takes about 15 mins per impacted tooth (my bottom) and less than 2 mins per normal tooth extractions (my top). And that is if everything is easy to do.

I started off being nervous but in no pain and I found the situation hilarious so I sniggered alot during my surgery. Think it was peppered with me going hehehehe since I couldn’t talk much whenever I heard his comments. 😂😂😂

What’s funny is that my teeth are like my personality, HAHAHA. I’m relatively petite and so is my mouth. But on the inside, my teeth are stubborn, tenacious and big. The roots are also complicated and fused together according to Dr Yong. So let’s just say that it was difficult trying to do a tooth extraction from me. He kept asking if I drank alot of milk when I was younger lol.

I think one of the most hilarious comments was him remarking that my roots were playing hide and seek with him and practically DARING him to get them out. Which yes, he managed to do so btw. Though he did have to break some of my teeth to get them out. Tadaahhh – skip if you don’t wanna see this gross pic lol.

Total bomb was $2636.25 for the entire surgery under local anesthesia, medication including antibiotics, painkillers and anti swelling and post surgery stitches removal. Q&M was able to claim around $1.9k from my Medisave so that meant that I had to pay $664.50 from my own pocket. Probably have to pay more cos I will be headed back to fill up the cavity caused by the impacted tooth and a few other dental procedures so I’m estimating the entire thing to be at least $1k in total.

Oh and something funny in my receipt was this => oral surgeon difficult extraction but luckily I wasn’t charged for it. I didn’t know that was chargeable to be honest LOL 😂😂😂😂

He gave me an icepack which he recommended me to alternate on my cheeks every 5 mins within 24 hours to reduce the swelling.

And of cos I had to put the gauze in my mouth to stop the bleeding and replace the bloody gauze every 30 mins for the next 3 hours. Was debating whether to put the photo up..but you know what? Even I think it’s too bloody gross so I will leave it up to your imagination lol. Just imagine a blood soaked gauze la huh. lol

Here’s a list of instructions that were given to me for your reference below(:

Oh and my face was numb then – here’s me attempting  to flash my so called megawatt smile like what some of my friends calls it but failing badly. Hilarious. It only started swelling like a chipmunk that night.

I was literally depressed and slightly grumpy for the rest of the day tho. In a way – I was sad/happy crying and whined to friends/threw a pity party for myself. Okay la, I just went through a surgery so that’s excusable for the day. Or two. Maybe three? HAHAHAHA 🙊

Still, am super APPRECIATIVE to those who stuck with my whining / checked up on me post surgery / told me to get better soon – thanks all for that! My mom too, for making sure I got my lunch, waited for me during my surgery to send me home, got me an ice pack and bought me things to eat(:

Dinner that night was just two bowls of taohuey. Don’t expect to eat for at least a week – recommended stuff to eat include cold food (if it’s porridge or soup, make sure it’s sufficiently cooled down) and ice cream lol.

Alrighty~ Hope this post is also useful to anyone planning to go thru their wisdom tooth surgery as well and needed to read more stories and have a rough idea on what to expect + estimated costs hence I’m openly sharing mine(:

Most importantly, thank God this is OVER, my FIRST and last time doing this surgery!!

Will update again on my post surgery situation over the next few days. It’s so scary looking at my schedule and seeing nothing on it for the next few weeks. I fear I might get bored out of my mind cos I’m so used to filling my time HAHAHA. But don’t forget that my self entertainment level is pretty high la so I’m not too worried actually. This probably means I can get my long overdue work done I guess – but that is if I can myself to be focused first (my biggest downfall..I’m so easily distracted) vs nua-ing in bed all day lol.

Anyway, thanks for reading this very lengthy post and have a happy week ahead!~ 😊