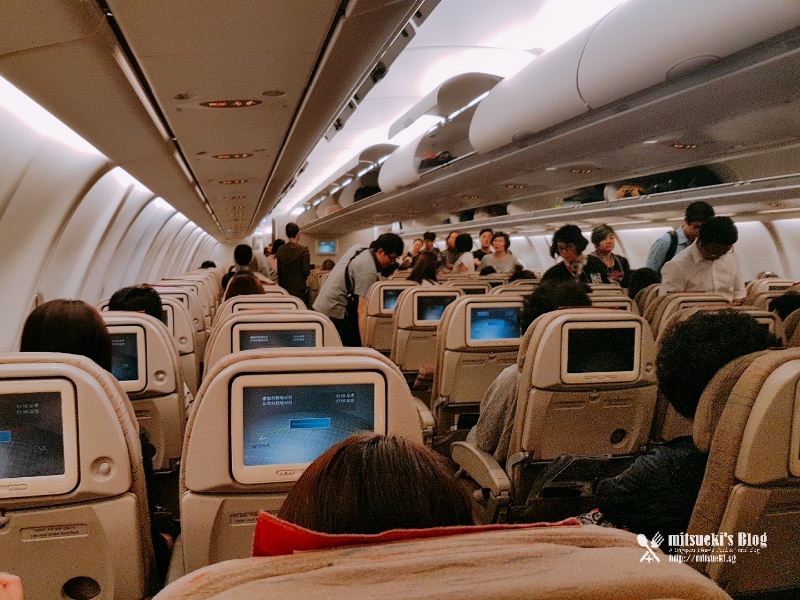 Crystal and I took Asiana Airlines during our recent trip to Seoul. We bought the tickets a couple of months in advance and paid around $650, an average ticket price to Seoul. It was lucky we did as our dates fell during the peak of the cherry blossom season so the price increased to $1k during our dates!

P.s Book your accommodations on Booking.com using THIS link here for S$40 cashback (min S$80) on your credit card! Alternatively if you prefer Airbnb, sign up HERE for S$45 off your first stay (min S$100)

Anyway, during the last trip to Seoul – I took Korea Air but this time round as mentioned; I took Asiana Airlines (OZ752 & OZ754) and here’s a quick review below!(:

I love the seat configuration for Asiana Airline because it was all 2/4/2 instead of the usual 3/3/3 configuration! This means couples or pairs can be seated together without the fear of a 3rd passenger 😂 Note this was for an older aircraft model so I’m not sure if it is applicable for all Asiana Airlines though!

Asiana Airline provides basic comforts such as a pillow and a blanket to all passengers by default. Legroom and pitch of the seat is decent and bigger than usual. Seat is surprisingly quite comfortable as well. Quite pleased overall with the comfort level.

The toilet is also stocked with toothbrush and toothpaste for overnight flights as well as moisturizer. Didn’t take a photo of the toilet but it was pretty big for an airline; definitely one of the biggest I have seen for Economy class!

Service in general onboard is good and the air stewards/stewardess are really friendly and helpful – always smiling! They easily switch between Korean and English very smoothly as well which is a nice bonus!

One thing I didn’t like was that because it was an older aircraft – no USB ports are provided for charging. Luckily I had my portable charger!
Meanwhile, Asiana Airlines in-flight entertainment also fell short of my expectations. Turned on their entertainment system to browse through the available movies and was horrified to see a mere handful. There were only 4 Hollywood movies to choose from on both my flights! Granted yes, the movies are relatively recent but the problem is that I watched most of them already. Checked all the other categories including Korean, Chinese movies and the range is from 2 – 8 movies to choose.

Thankfully it was a red eye flight to Korea so I only watched 1 movie. Coming back on the return trip was a different story..with almost 8 hours of daylight; I watched 1 English movie before resorting to watching Korean movies as the selection is just..WAYYYY too small 😑 Would actually be BORED if it was a longer flight i.e to USA or something.

In terms of food, there are only 2 options to choose from. On both our flights, we had a choice between the bibimbap and something else. We opted for the former on our trip to Seoul and the latter option on our return trip. My personal recommendation is to just stick with the bibimbap all the way as it is the only meal that actually tastes decent.

Our flight to Seoul – we were only offered 1 meal and we chose the bibimbap. Savoury and delicious for an in flight meal! No other meals nor snacks were provided during this red eye flight as we landed at 6am or so!

On our return flight, it was bibimbap (again) and a seafood option. Opted for the latter and it was an immediate regret. Bland and quite tasteless shakes head

We were offered snacks on our return trip to Singapore as it was an afternoon-evening flight including mixed nuts and pizza. They were just okay. In general, a very average meal experience onboard Asiana Airlines.

Lastly, just to mention – for luggage wise; you only get 1 check-in luggage (23kg) for economy unless you are flying to America, then you get 2. It sufficed for us on a short trip though!(:

Overall, I wouldn’t mind flying by Asiana Airlines again. However, if there are other options around the same price (i.e SIA/Korea Air), I would probably take the latter instead though!(:

P.s Book your accommodations on Booking.com using THIS link here for S$40 cashback (min S$80) on your credit card! Alternatively if you prefer Airbnb, sign up HERE for S$45 off your first stay (min S$100)