A 34-year-old man has been arrested on 12 July 2013 at about 11.30pm in connection with the double murders at Kovan on 10 July 2013. The arrest of the suspect was possible through the close collaboration between the Singapore Police Force (SPF) and the Royal Malaysian Police (RMP). The SPF would like to thank the RMP for their unwavering support and assistance in this case.

Apparently the murder suspect description has been revealed as spotted in OMY.SG from Lianhe Wanbao.

Apparently the police have on hand the CCTV video of the entire murder occurring while some fingerprints of the suspect were found in the abandoned car found in Eunos.

Will post the full English version once it’s out. Wish there were photos though as the description fits alot of people in Singapore =.=

Police have located the silver Toyota Camry with the licence plate SGM 14J, which was involved in the suspected double murder of a father and son in Kovan on Wednesday. The car was found along Block 1084, Eunos Avenue 7.

The Straits Times has also learnt that the father who was killed is Mr Tan Boon Sin, who owned a car business in Eunos Avenue 3. Mr Tan, who was in his 70s, was killed in his home, 14J Hillside Drive, on Wednesday afternoon.

– No information on the suspect has been released yet –

In what must have been a shocking series of events on Wednesday afternoon, eyewitnesses reported seeing a car dragging a man from Hillside Drive to Kovan MRT, about 1km away. It then sped off.

Police have identified the body as that of a 42-year-old Chinese man. Later, as they were following a blood trail, police discovered the body of the man’s father, who is in his 70s, in a private home on 14J Hillside Drive. The latter was suspected to have been murdered at the house.

Police are looking for the driver of a silver Toyota Camry with car licence plate SGM 14J in connection with the two bodies found in Kovan on Wednesday evening.  Anyone with information on the driver or the case may call 1800-255-0000.

According to a neighbour of the older victim, the vehicle belonged to him. They also suspect a connection between the younger victim and driver of the Toyota Camry. An eyewitness said that he saw a body being dragged from a car’s rear. He saw the car “dragging it for 10 to 20m” before it was “pushed” from the car near Kovan MRT station. He added that the man was “barely conscious” and his head was “full of blood”.

The eyewitness also said that there were many motorists honking and one went to check on the victim. Later, he covered the victim’s head with a white cloth. The incident caused a huge traffic jam in Kovan as the three lanes on the left were subsequently blocked by the police, who were also directing traffic.

Neighbours were gathering at Hillside Drive to find out more about the case.

At Hillside Drive, one of the neighbours, a 73-year-old man who wanted to be known as Mr Liang, told Yahoo! Singapore that the deceased older man and his wife “were a nice couple”. He added that they had lived in the house for 10 years.

Kovan double deaths: Murder suspected, and bodies believed to be father and son

The police have classified the case of the two bodies found within 1 km of each other at Kovan as suspected murder. The man found dead inside a house in Hillside Drive was in his 70s, while the man found dead outside Kovan MRT station along Upper Serangoon Road was believed to in his 40s. They are believed to be father and son.

Like everyone, I was really shocked and wondered what’s going on. However, as I did more research, I found photos of these tweets being posted on EDMW forums:

Details are still not confirmed so I’m not sure how TRUE this is.
Will update more once I find out more information about what exactly is going on.

First spotted on EDMW forums and The Straits Times:

Two dead bodies found in Kovan within 1km of each other 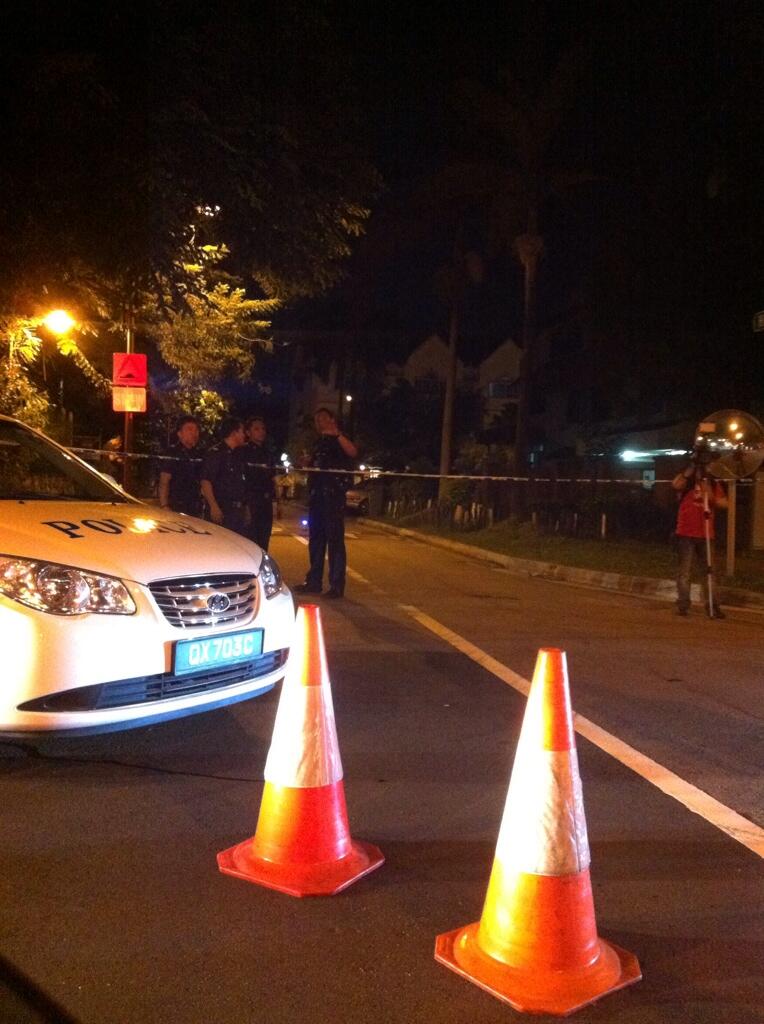 Two dead bodies were found in Kovan about a kilometre from each other. A blood trail could be seen between a private house on Hillside Drive and outside Kovan MRT station on Upper Serangoon Road, where each of the bodies were believed to have been found. Officers from the Crime Investigation Department were on the scene on Wednesday evening, and a lane along Upper Serangoon Road was blocked off.

An eyewitness said that she saw a man being dragged by a car while she was driving. About 20 cars were honking loudly at the driver but he or she did not stop, said the eyewitness.